Scottish Government ran a four-week marketing campaign between January and February 2015 to raise awareness of what child sexual exploitation (CSE) is, improve public understanding and empower those with concerns to act upon them.

The national campaign comprised of a new TV advert – a UK first in terms of targeting parents on the subject of CSE – supported by outdoor and digital advertising, a new website and PR activity.

The marketing campaign was aimed at telling people: 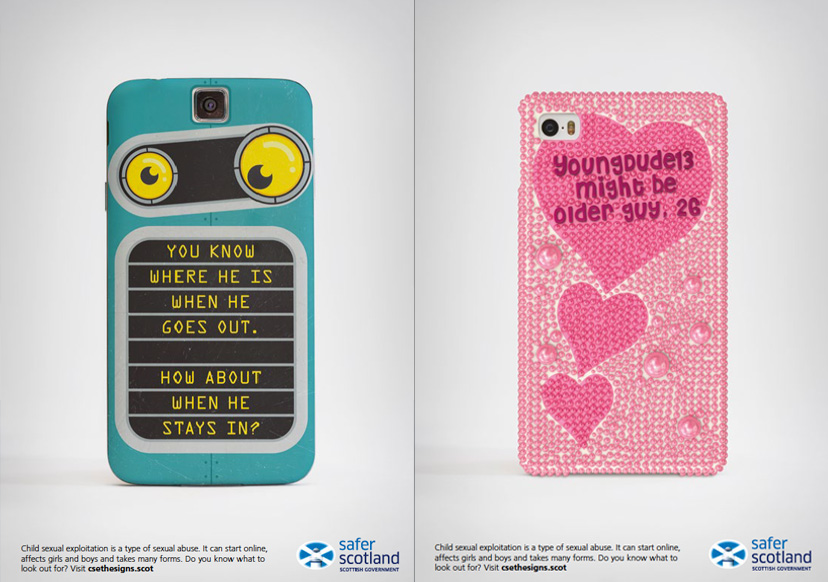 The activity looked to educate young people about the signs of a healthy and unhealthy relationship to help empower them to take appropriate action if they are concerned about themselves or a friend. It can be difficult for young people to work out what is healthy and what isn’t in their early relationships. A racing heartbeat and butterflies in your stomach etc. aren’t always positive. Sometimes young people need to question these emotions and behaviours and be aware that there is advice and support available if they feel out of their depth.

Based on the idea that young people can pay more attention to their alerts received on social media sites than to their own emotional instincts, a series of bold posters encouraged young people to “Listen to your Alerts” and seek help if they’re in any way concerned.

Posters and leaflets were provided to both local and national stakeholders and partner organisations, including ourselves. Activity directed young people to the campaign website where more information about the warning signs of sexual exploitation can be found.

If you or someone you know is suffering from abuse get in touch.

If you would like to learn more about our work, volunteer with us or make a donation to help us continue our work, please contact us by phone on:
01324 635 661.

Your contribution can really make a difference to our work with abused women, men and children.

Make a donation online through justgiving.com.